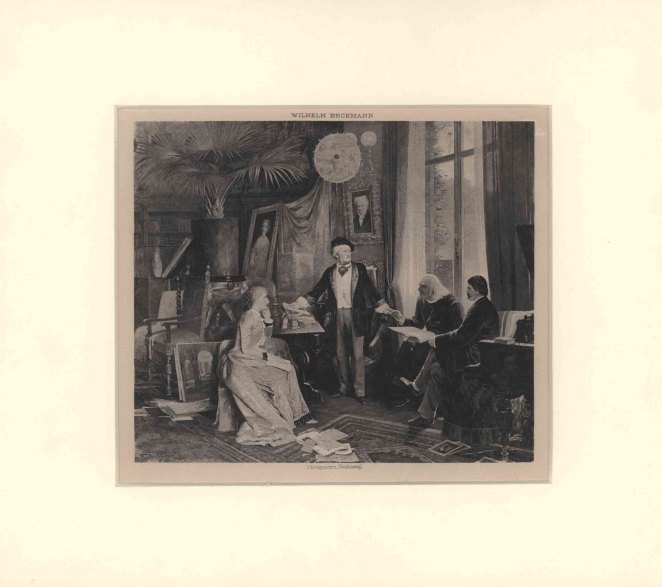 Click Image to ZoomEnlarge Image
A photogravure by the Franz Hanfstaengl Publishing Company after an original 1880 painting by Wilhelm Beckmann, depicting Richard Wagner, Cosima Wagner, Franz Liszt, and Hans von Wolzogen in a richly decorated drawing room at Wahnfried House in Bayreuth.
Richard and Cosima Wagner occupied Wahnfried House from 1874 until his death in 1883. The home was included in plans for the Bayreuth Festspielhaus and built in tandem with that theater between 1871 and 1874. It is today the home of the Wagner Museum and the gravesites of Richard and Cosima.

Hans von Wolzogen (1848-1938), a prominent editor and man of letters, was a close friend and colleague of the Wagners and frequent guest at Wahnfried House. Wagner enlisted Wolzogen in 1877 to edit the Bayreuther Blätter, a monthly newsletter for the visitors of the Bayreuth Festival. Wolzogen would hold that post until his death.