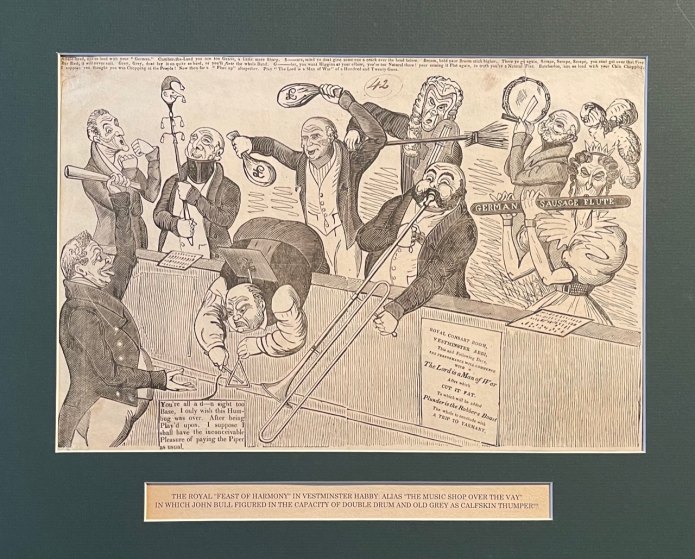 Click Image to ZoomEnlarge Image
This hilarious engraving is scarce and captioned in full: The Royal "Feast of Harmony" in Vestminster Habby: Alias "The Music Shop Over the Vay," in which John Bull Figured in the Capacity of Double Drum and Old Gery as Calfskin Thumper!!!". The image, according to the British Museum, depicts the king conducting an orchestra of politicians and John Bull (a British caricature something along the lines of America's Uncle Sam and meaning a typical Englishman).

The musicians depicted include a man playing a smiling jingling Johnny, a violinist whose bow is a broomstick, a woman playing a German sausage as a flute, a trombonist, and a drummer using two money bags to bang the rear end of a man playing a triangle with a music rack protruding from his neck, mouthing I only wish this Hum-bug was over…

The engraving includes a supertitle with "musical directions": Addle-head not so loud with your “German,” Cumber-the-Land you are too Grave, a little more Sharp. S-sex, mind ye don’t give someone a crack over the head below. Broom, hold your Broomstick higher. There ye go again, Scrape, Scrape, Scrape. You cant get over that Five Bar Rest, it will never suit. Grey, Grey, don’t lay it on quite so hard, or you’ll forte the whole Band. G-ter, you want Higgins at your elbow, youre too Natural there! You’re coming it Flat again, in troth youre a Natural Flat. Butcherloo, not so loud with your Chin Chopping, I suppose you thought you was Chopping at the People! Now then for a “Flare up,” altogether. Play “the Lord is a Man of War” of a Hundred and Twenty Guns.

The program for the upcoming concert is depicted on the railing of the orchestra pit: ROYAL CONSART ROOM, VESTMINSTER ABBI, this and following days, the performance will commence with
the Lord is a Man of War
after which
CUT IT FAT
to which will be added
Plunder is the Robber’s Boast
The whole to conclude with A TRIP TO YARMONY.

This print is No. 42 in a series of 131 satirical prints by Charles Jameson Grant entitled The Political Drama, the images of which depict the monarchy, politicians, religious figures, and law enforcement.
Inquire
GPH-15204$280