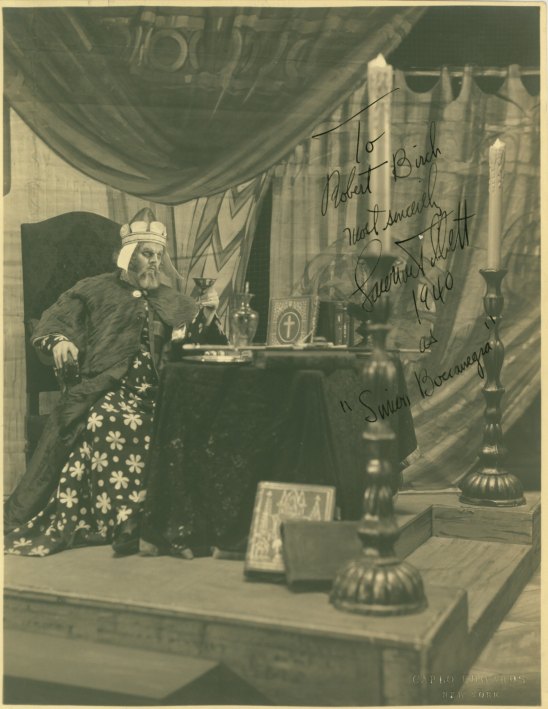 Click Image to ZoomEnlarge Image
A dramatic production shot of baritone Lawrence Tibbett in the title role of the Metropolitan Opera's first production of Verdi's Simon Boccanegra, inscribed "To Robert Birch / Most sincerely / Lawrence Tibbett / 1940 / as 'Simon Boccanegra'".
Among Lawrence Tibbett's greatest successes at the Met were his performances of the title role in Simon Boccanegra, which he sang in the opera's American premiere at the Met in the early months of 1932. The production was such a success that it was selected to open the following season - the first opening night to showcase a male singer since Enrico Caruso's passing. Reviewing that opening night performance, Lawrence Gilman wrote of Tibbett in the New York Herald Tribune, "It is an extraordinary tribute to the loftiness of his embodiment of this role that the name of the incomparable Chaliapin has been mentioned in the general praise of the young American's achievement … he is easily the most histrionically and musically gifted, the most imaginative and the most richly promising of the present generation of American opera singers." Tibbett returned to the role repeatedly at the Met throughout the 1930s, heading splendid casts, including a revival in 1939.
Inquire
PHO-00606$300