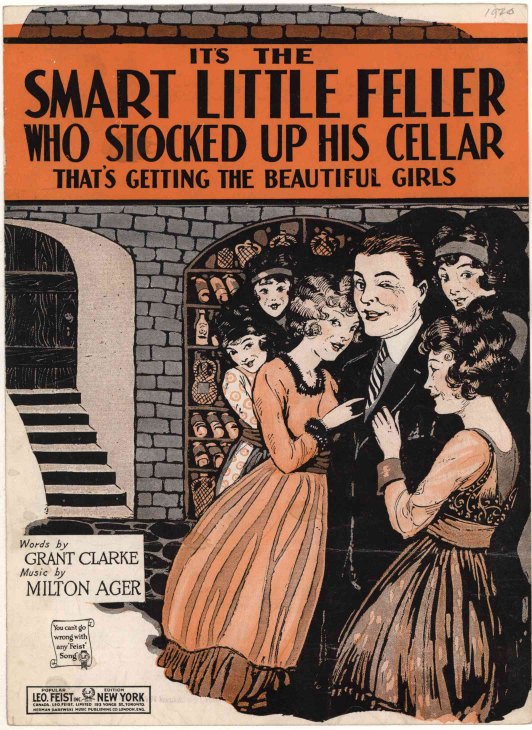 Click Image to ZoomEnlarge Image
Five Prohibition-era songs relating to the proposal, passage, and repeal of the Eighteenth Amendment, which greatly curtailed the public sale and consumption of alcohol in the United States from 1920 to 1933:

"Every Day Will Be Sunday When The Town Goes Dry", by William Jerome and Jack Mahoney. Leo Feist: New York, 1918. 3 pp. Small quarto.

"How Are You Going to Wet Your Whistle When the Whole Darn World Goes Dry?", by Francis Byrne, Frank McIntyre, and Percy Wenrich. Leo Feist: New York, 1919. 3 pp. Small quarto.

"It's the Smart Little Feller Who Stocked Up His Cellar That's Getting the Beautiful Girls", by Grant Clarke and Milton Ager. Leo Feist: New York, 1920. 3 pp. Small quarto.

"I'd Like to Find the Guy That Wrote the Stein Song", by Johnny Johnson and Harry McDaniel. Shapiro, Bernstein & Co.: New York, 1930. 5 pp. Quarto.

The group represents a fascinating history of twentieth-century American prohibition from start to finish. "Everyday Will Be Sunday" and "How Are You Going to Wet Your Whistle" were published after the Senate proposed the Eighteenth Amendment in December 1917. As states gradually ratified it in the course of the following year, songs of the type reflected the concerns of those partygoers and revelers who feared the enforcement of its laws nationwide.

Although the amendment passed in early 1919, it did not go into effect until January 1920. Affluent Americans used the interim year to stockpile wine, beer, and liquor for at-home consumption, which would remain permissible under the new laws. Even grape juice sales soared as people realized they could let it ferment and turn to wine. Songs like "It's the Smart Little Feller" amusingly noted the popularity of those individuals with an ample alcohol supply. Still, every stockpile began to wane sooner or later, and people began to exploit one of the amendment's loopholes by soliciting their doctors for prescriptions for hard liquor. "Oh! Doctor", one of the funnier songs in the group, reflects this popular practice.

"I'd Like to Find the Guy" is a parody song about a man who cannot bear to hear "The Maine Stein Song", a collegiate drinking tune, on the radio any longer. The top song of 1930, "The Maine Stein Song" was massively popular, but it was also criticized in some circles for being anti-prohibitionist.

The Eighteenth Amendment was repealed in December 1933. Its toll on the economy and agriculture, the difficulty of its enforcement alongside the rise of bootlegging, and the general lack of fun all contributed to its demise. Celebratory songs like "Cocktails for Two" reflected the widespread joy at the end of prohibition.