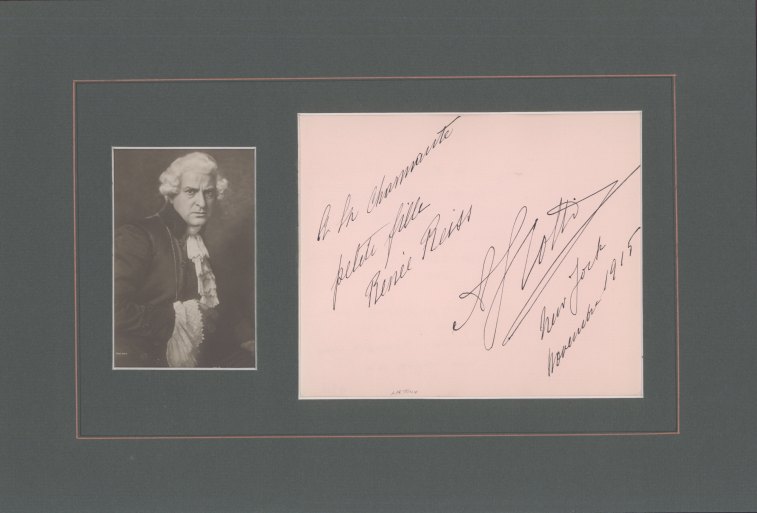 Click Image to ZoomEnlarge Image
Signed "A Scotti" on pale pink album leaf, dated "Novembre 1915" - with the sentiment "a la charmante petite fille Renée Reiss" - matted with a period postcard of Scotti as Baron Scarpia in Tosca. Total measurement of 11" h x 16.25" w. Very good condition.
One of the greatest Italian baritones of his time, Antonio Scotti found an artistic home at the Metropolitan Opera, where he sang, after his 1899 debut, for a remarkable 33 seasons. When Tosca had its Metropolitan Opera premiere in 1901, Scotti sang Baron Scarpia - to become one of his most popular roles - and he sang the title role in Rigoletto the night of his friend Enrico Caruso's Met debut in 1903. Admired for a variety of roles, Scotti sang Lescaut in a performance of Massenet's Manon on November 30, 1915, around the time he signed this autograph for young Renée Reiss, whose father (tenor Albert Reiss) sang Guillot de Morfontaine in the same performances.
Inquire
SIG-09311$275