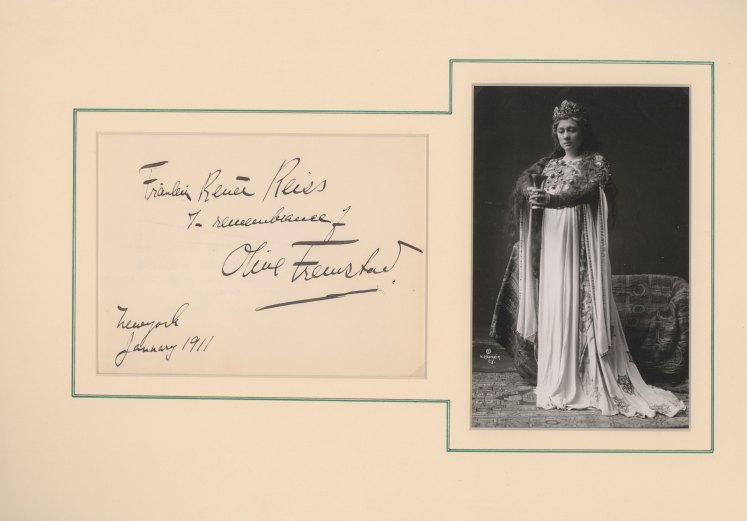 Click Image to ZoomEnlarge Image
Signature on an album leaf, with greeting to "Fräulein Renée Reiss / In remembrance of …", dated January 1911 in New York. Matted with a celebrated full-length Mishkin character portrait of Fremstad as Isolde in Wagner's Tristan und Isolde.
Olive Fremstad had equal success in both the dramatic soprano (particularly Wagner) and mezzo-soprano repertoire. Her busy Metropolitan Opera career, between 1903 and 1914, was largely devoted to Wagnerian soprano roles, though she still sang key mezzo roles as well. With Caruso, Fremstad had performed Carmen in San Francisco the night before the 1906 earthquake. The intensity with which she sang probably limited her operatic career, which ended in 1920, before she was 50. When she was at the Met, though, Fremstad was a formidable and compelling artist. In the month of January 1911 alone, she sang leading roles in three operas (Tristan und Isolde, Armide and Parsifal) in which the tenor Albert Reiss, father of Renée Reiss, also sang. The signature included here must have been obtained during one of those performances.
Inquire
SIG-09247$175