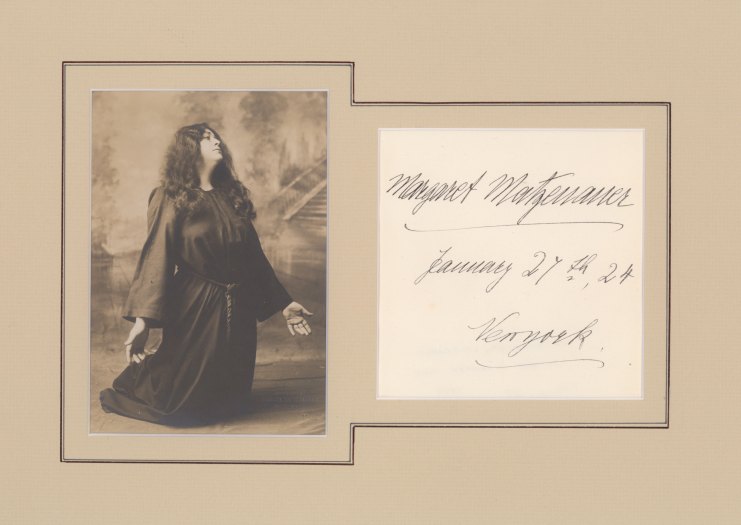 Click Image to ZoomEnlarge Image
Full signature, dated Jan. 27, 1924, New York, matted with an embossed Mishkin photograph of the supplicant Matzenauer as either Santuzza in Cavalleria rusticana or Kundry in Parsifal.
Margaret Matzenauer began her operatic career in 1901 in Germany as a contralto and mezzo-soprano, which is how she made her Bayreuth Festival debut in 1911. Later the same year, she made her Metropolitan Opera debut as Amneris in Aida with Caruso and Destinn, and Toscanini conducting. Only a few days later, she stepped in to sing Brangäne in Tristan und Isolde, also under Toscanini. In coming seasons, Matzenauer would successfully mix dramatic soprano roles with mezzo-soprano roles - Carmen and the Countess in Le nozze di Figaro, Dalila and Brünnhilde in Die Walküre. She sang 19 busy seasons with the Met, then began teaching (Blanche Thebom was her pupil) and even appeared in the 1936 film Mr. Deeds Goes to Town.
Inquire
SIG-00721$125