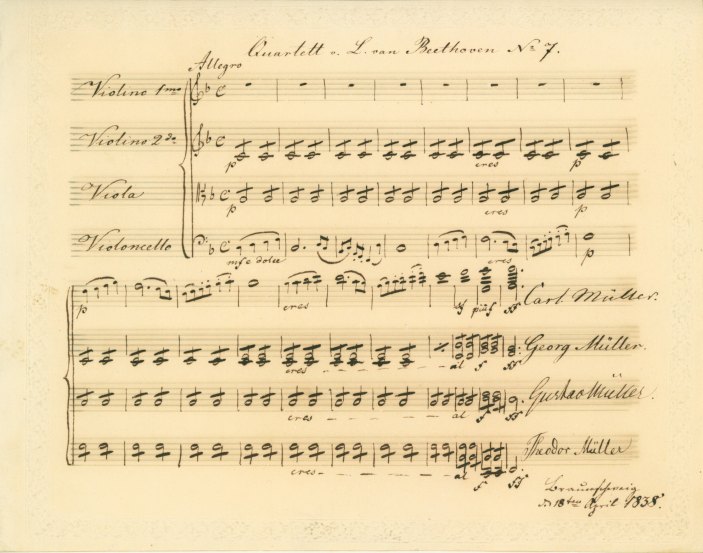 Click Image to ZoomEnlarge Image
A beautifully penned, substantial 18-bar musical quote from Beethoven's String Quartet No. 7, with hand-drawn staves.
The Müller brothers were a family of celebrated quartet players famous for the perfection of their ensemble playing. They were the sons as well as pupils of the principal musician to the Duke of Brunswick. Carl Friedrich (1797-1873) was first violin in the quartet and was also concertmaster to the Duke. Theodor Heinrich (1799-1855) was the viola player. August Theodor (1802-75) played the cello, and Franz Ferdinand Georg (1808-55) was the second violin.

The Müller brothers resigned from the Duke of Brunswick's employ in 1830 because the Duke forbade them from appearing in outside musical performance of any kind. Their first appearance outside Brunswick was in Hamburg, where they were so successful that an invitation to Berlin followed, where they were again met with wide admiration. Several tours abroad extended their fame throughout the world. The Müller brothers brought the art of quartet playing to a new high.

This is the only musical quote we have ever seen by the Müller Brothers.