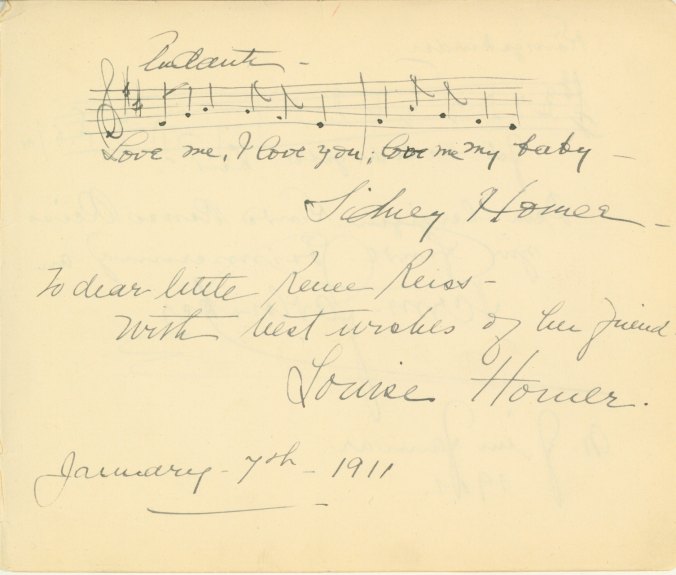 Click Image to ZoomEnlarge Image
Album leaf signed on both sides. On the recto is tenor Hermann Jadlowker, with a musical quotation from Humperdinck's Königskinder and a warm sentiment in German to Renée Reiss, whose father appeared in Humperdinck's opera with Jadlowker.

On the verso, the leaf is signed by mezzo-soprano Louise Homer (also appearing in Königskinder) - "To dear little Renée Reiss / with best wishes of her friend" - and her husband, composer Sidney Homer, who includes a quotation from his own song "Love Me, I Love You." Both autographs are dated January 1911, shortly after the premiere of Königskinder.

The warmth communicated by both of these autographs attests to the good will generated by the world premiere performances at the Metropolitan Opera of Humperdinck's Königskinder, which had its debut on Dec. 28, 1910. Young Renée Reiss (whose father Albert Reiss created the role of the Broommaker in the opera) had Jadlowker and Homer sign on the same page of her album. Jadlowker's Met career was brief but memorable, while Homer was a mainstay of the company from her debut in 1900 until her final performance in 1929. She was also the aunt of composer Samuel Barber.
Inquire
AMQ-11276$375