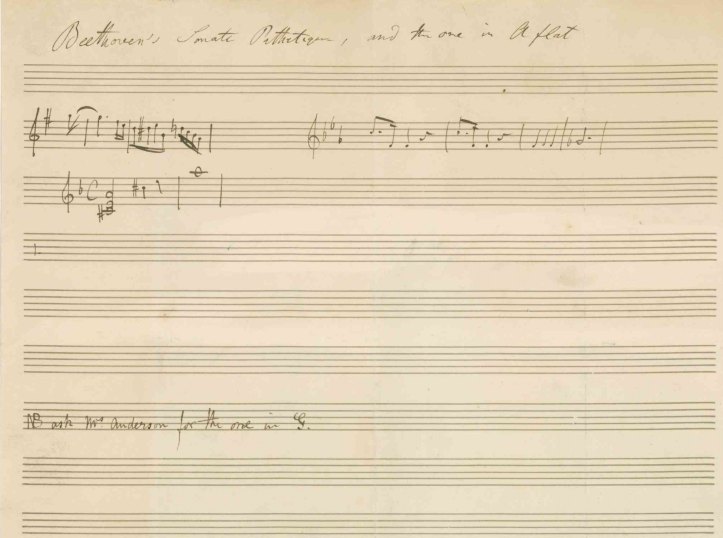 Click Image to ZoomEnlarge Image
Beethoven quoted by his friend.

At the top of a sheet of music paper, Moscheles writes Beethoven's Sonate Pathetique, and the one in A flat, and includes on the second and third staves the treble-line incipits for the three sonatas that comprise Beethoven's Op. 31. Beneath the incipits Moscheles jots a reminder: NB ask Mrs. Anderson for the one in G.

Moscheles does not include the incipits for the Pathétique (Op. 13), either of Beethoven's piano sonatas in A flat (Opp. 26 and 110), or any of the sonatas in G major or minor. One wonders if this was, perhaps, a shopping list of sorts for a student.

When Moscheles began his piano studies as a young boy at the Prague Conservatory in 1804, his teacher insisted on a steady diet of Bach, Mozart, and Clementi. But Moscheles soon discovered Beethoven's Pathétique sonata and could think of nothing else. Within four years he moved to Vienna to befriend the great composer, and in 1814, Beethoven personally selected him to produce a piano reduction of Fidelio for Artaria. Their friendship would endure until the end of Beethoven's life.

Because he uses English, one suspects that Moscheles wrote these incipits while he lived in London between 1822 and 1846. Moscheles was particularly well liked there and found ample opportunity to perform, compose, teach, and socialize with prominent musicians, including fellow pianist-composers Muzio Clementi and Johann Baptist Cramer. Moscheles also used his good standing with London's Philharmonic Society to arrange a deal for the broke and dying Beethoven in 1827: in exchange for the premiere of the Tenth Symphony, the society sent Beethoven £100.