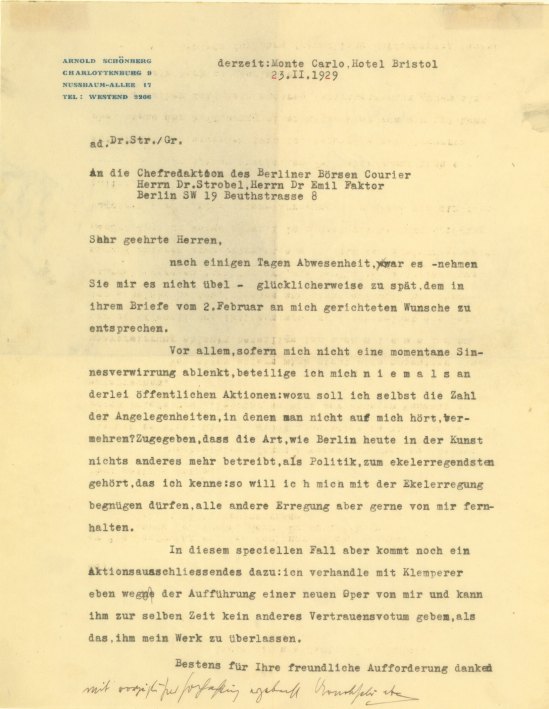 Click Image to ZoomEnlarge Image
A defiant letter that demonstrates Schoenberg's reluctance to engage in the challenging politics of the Weimar Republic.

Schoenberg declines a request from the editors-in-chief of the Berlin Börsen Courier to sign an article in support of Otto Klemperer, the Jewish director of Berlin's controversial Kroll Oper. He explains, in part: After some days of absence it was - please do not be offended - fortunately too late to respond to your wish uttered in your letter of February 2... I will n e v e r participate in such public actions: why should I myself increase the number of matters in which I am not heard? I admit that the way how Berlin, in the arts, now turns everything into politics, belongs with the most disgusting things I know. Thus I want to be allowed to confine myself to being disgusted and keep away from any other excitement. In this special case, however, there is something else that prevents me from taking action: I am in negotiations with Klemperer about the production of a new opera of mine, and I cannot give him a vote of confidence other than leaving him my work for performance.

Schoenberg adds with deepest respect and devotion in manuscript preceding his signature.

Otto Klemperer (1885-1974) was the director of Berlin's Kroll Opera from 1927 to 1931. The theater promoted non-traditional productions that were frequently denounced by the press for political and artistic radicalism; Klemperer's Jewish background only compounded the severity of their attacks. Emil Faktor and Heinrich Strobel of the Berliner Börsen-Courier published a "symposium" on February 19, 1929, in defense of the theater and Klemperer. Although Schoenberg declined to participate, as this letter demonstrates, the publication boasted the signatures of several well-known artists, including Paul Hindemith, Kurt Weill, and Walter Gropius. Criticism grew worse, though, and the government closed the Kroll Opera in 1931. Emil Faktor was shortly thereafter forced to resign and later died in the Holocaust.

The "new opera" mentioned in the letter is Schönberg's Von heute auf morgen. Klemperer did not produce it, though; the work was premiered in Frankfurt in 1930.

This significant letter reveals insights into Schoenberg's personality and his complicated political stance prior to WWII, a time when he had many disagreements with several of his colleagues on political grounds, sometimes even leading to their not speaking to him for a few years.