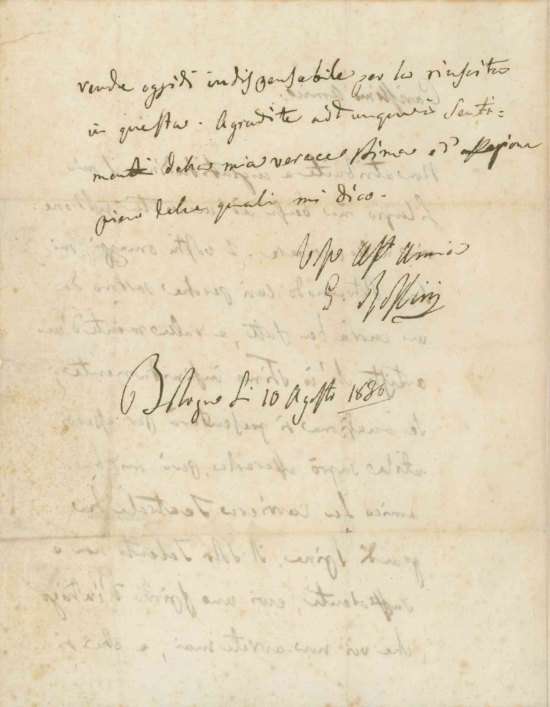 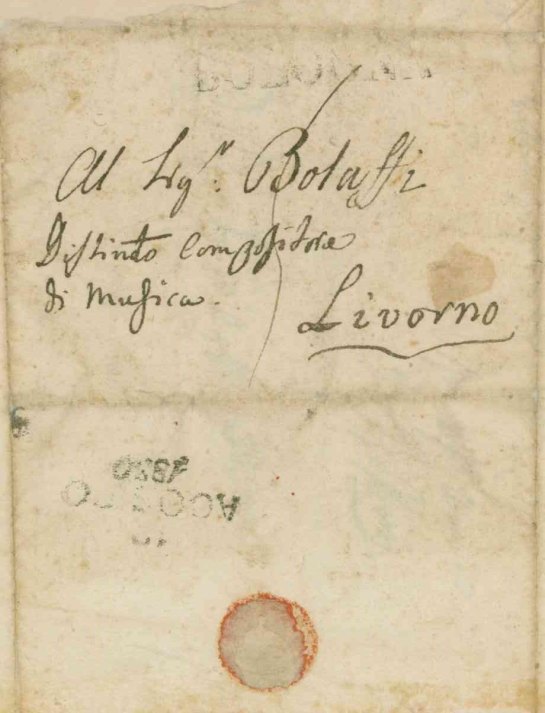 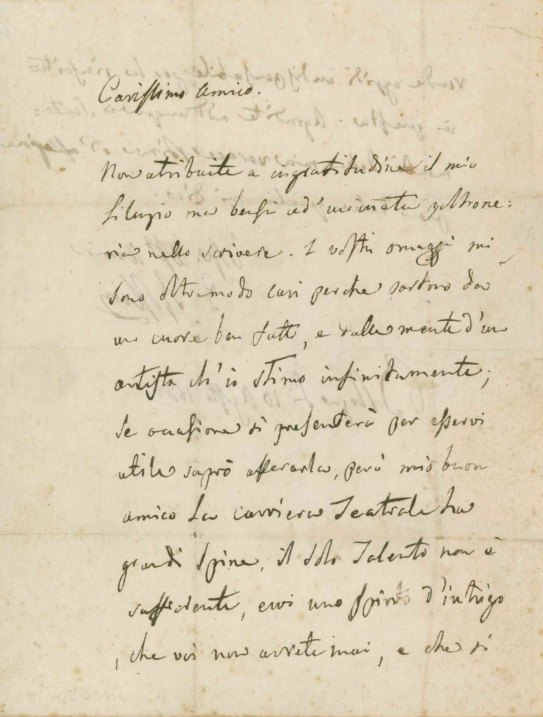 Rossini writes to belatedly thank fellow Italian composer Michele Bolaffi for some recent compliments: Don't assign to ingratitude my silence but rather to an innate laziness for writing. Your praises are particularly dear to me because they come from a well-made heart, and moreover from an artist whom I esteem infinitely.

Revealing something about the theatrical practices of the day, Rossini extends himself to Bolaffi with a rather pessimistic warning: the theatrical career has big thorns, talent alone does not suffice, the push of an intrigue would help, which you will never have, and which…is indispensible for success in this matter.

Rossini penned this note shortly after spending almost two weeks in Florence in June 1830, socializing and enjoying concerts while he waited impatiently for the Opéra to send him a new libretto. It is likely he encountered Bolaffi during this visit, as Bolaffi worked at the synagogue in nearby Livorno. (One may be tempted to interpret the year of Rossini's signature as 1836, but this is impossible: he was in Bavaria in August of 1836, and this letter is very clearly signed from Bologna).

Michele Bolaffi (1768-1842) is best remembered for his long tenure as musical director of the Great Synagogue in Livorno, where he composed choral and instrumental music that was regularly used at various Italian synagogues through the early twentieth century. In his own time, though, he also enjoyed an international reputation, having served as a church musician at the court of Louis XVIII, as Kapellmeister at Hanover, and as the touring accompanist of Madame Catalani.

Rossini's dim view of theatrical enterprise is perhaps to be expected, as by 1830 he had grown quite weary: the dizzying pace of his early career, the demands of writing and rehearsing Guilluame Tell, the death of his mother in 1827, persistent illness, and financial security all tempted him into retirement after the premiere of Tell in 1829. Although he shortly thereafter signed a contract to compose four additional works for the Opéra in exchange for a lifetime annuity from Charles X, the Second Revolution in July 1830 shattered these plans and with it, his operatic career was over.