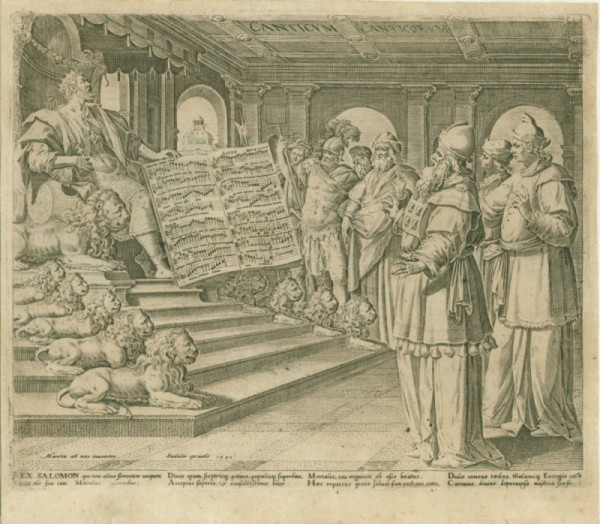 Click Image to ZoomEnlarge Image
Rex Salomon, after Martin de Vos. King Solomon is shown on his throne at the top of stairs flanked by lions. He is holding an open choirbook on which is portrayed the complete music for the motet Osculetur me osculo oris sui by Andreas Pevernage (1542 or '43-1591). The motet is for 5 voices (Duo in carne una, Tenor, Altus, Bassus) At the base of the throne seven men in a variety of dress stand apparently in awe of the music. The title Canticum canticorum is written on the ceiling. Included Work
This engraving is the only known extant source of this work by Pevernage.
Jan Sadeler was the creator of the picture-motet genre and its master exponent. His very first engraving portraying a "picture-motet" appears six years prior to this one: The Virgin and Child with Saint Anne, [published in Antwerp in 1584.
Inquire
GPH-14053$950