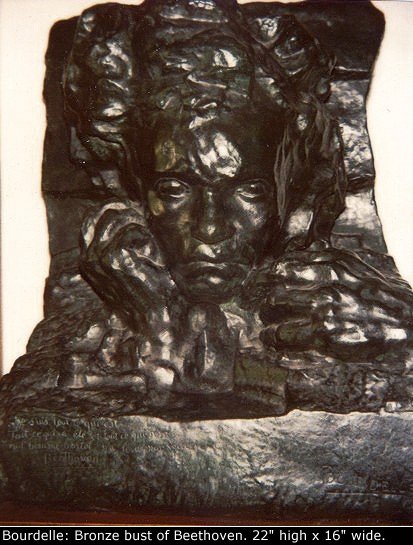 Inscription on front at left of base reads:

Signed "Bourdelle" on lower right of base. "Alexis Rudier Fondeur Paris" stamped on the back.

According to Michel Dufet, whose catalog raisonné was published in his Le Drame de Beethoven Vécu par Bourdelle, the bust is known as "Beethoven aux Deux mains" and dates from 1908 when it was produced in granite (now in the Bourdelle museum in Paris), in bronze (our version) and again the same year in bronze but as a variant.

The bust we are presenting is one of ten castings.

Émile-Antoine Bourdelle was a pupil and assistant of Rodin and is considered one of the pioneers of 20th century monumental sculpture. There are two museums in France devoted to his work, including the Musée Bourdelle in Paris. He made his first of many sculptures of Beethoven in 1888.