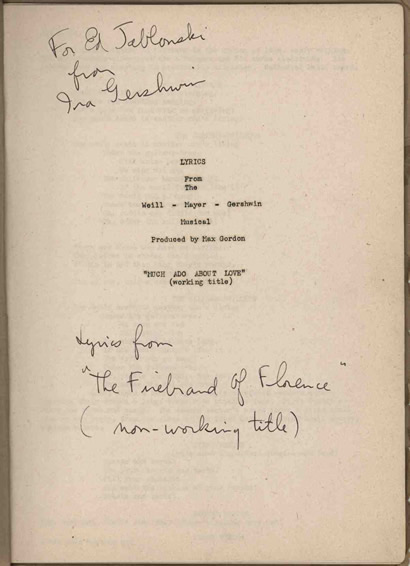 Click Image to ZoomEnlarge Image
The Firebrand of Florence, originally a 1924 play called The Firebrand by Edwin Justus Mayer, was adapted by Ira Gershwin and Mayer in 1944 , with a score by Kurt Weill and sets by Max Gordon. It opened in New York on Mary 22, 1945 and only ran for 43 performances. Nonetheless, Gershwin himself was not displeased with the work. He wrote in a letter to Ed Jablonski in Jan. of 1945: "...Kurt Weill has done, I believe, the best job he's ever done - it's a much more rounded score than Lady in the Dark or One Touch of Venus - also it's going to have the best singing I've been connected with since the original Porgy & Bess Company. Naturally lots of things can go wrong before the opening and lots more after, but at the moment we're all pretty optimistic and know we're connected with something worth while doing artistically - and, (this we hope) financially."

In a letter he wrote to Jablonski in April 9 after the first performance, he admitted that the musical got mostly bad notices "so it looks as if nine months of hard work has been shot to hell….All I can say is that Weill and I had a most interesting and exciting time working on the score and feel we have done nothing to be ashamed of - in fact we're still rather proud of our contribution."

Edward Jablonski was an important writer on American musical theater and author of The Gershwin Years and Harold Arlen: Happy with the Blues. Jablonski had a decades-long correspondence with Ira Gershwin.
Inquire
BKS-10928$750