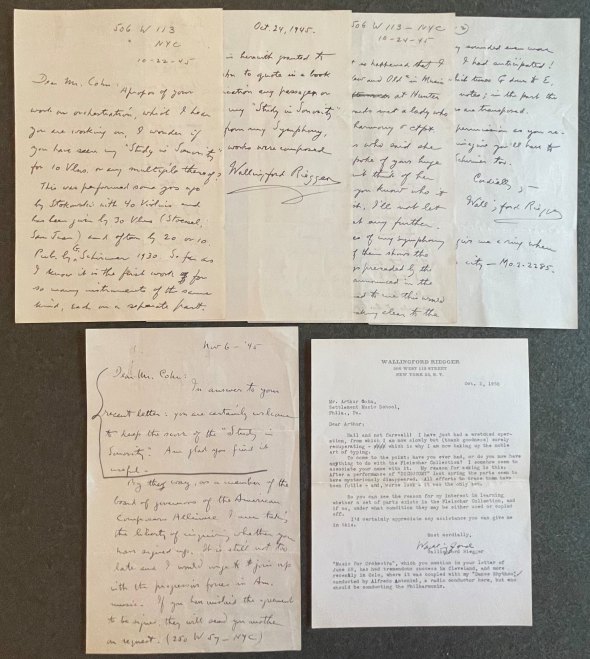 Click Image to ZoomEnlarge Image
Across four autograph letters from October and November 1945, Riegger offers his Study in Sonority and Symphony for inclusion in Cohn's forthcoming publication on orchestration. He also justifies some of his more colorful compositional choices in those pieces, explaining, for example, that in measure 17 of the Symphony, the tuba imitates the trombones, but only roughly. I am well aware that the staccato 8th notes could be easily played, but the effect of leaving them out is good.In a fourth typed letter of 1956, Riegger writes to ask if Cohn might help track down the music for his own Dichotomy, as the only existing set of parts had mysteriously disappeared.
When Arthur Cohn began a book on orchestration, several leading American composers enthusiastically offered him their input and music, just as Riegger does in these letters. Although Cohn never finished the project, which was to be titled The Art and Science of Orchestration, his drafts, notes, illustrations, and research clippings are intact at the New York Public Library.

Arthur Cohn was a publisher, conductor, composer, and orchestrator as well as longtime Director of the publishing company Carl Fisher where he was responsible for publishing many of Ives's works. He was also director of the Edwin Fleischer Collection in Philadelphia from 1934-52.

Riegger has an important place in twentieth-century American music, both as a composer and as a teacher. As a cello student, he was a member of the first graduating class of what was to become the Juilliard School, and he was one of the first American composers to adapt Schoenberg's twelve-tone technique.