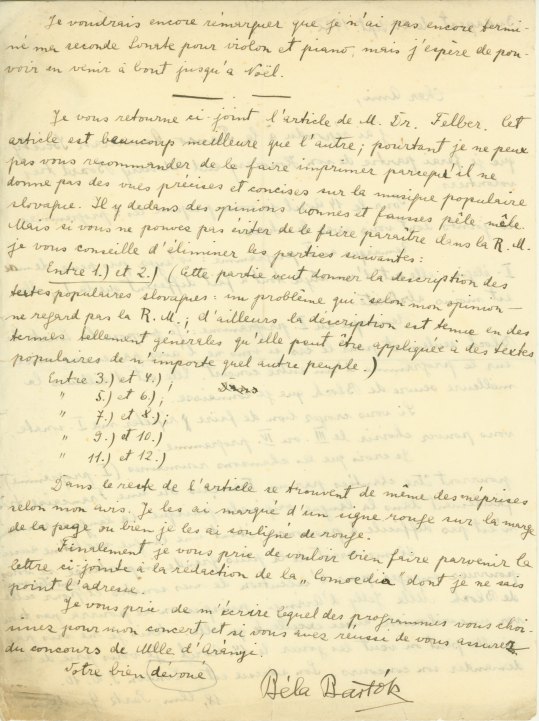 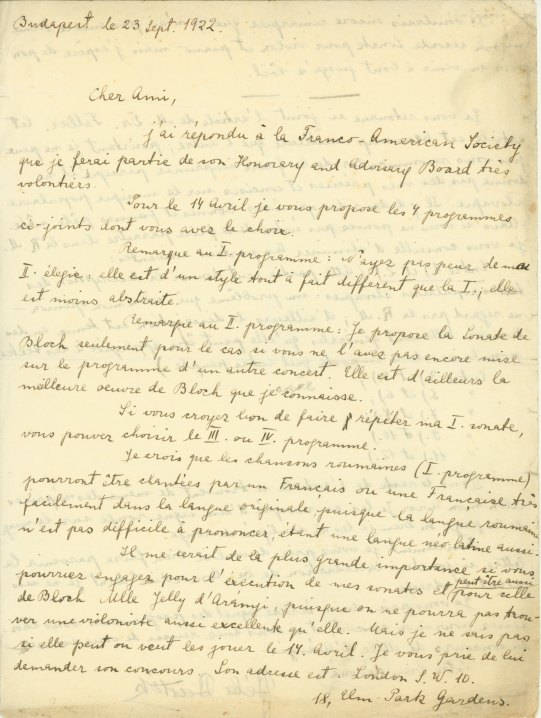 Letter to an anonymous correspondent saying that he will be glad to join the Franco-American Society as an honorary member. He offers four programs for a concert on 14 April: Remark about the first program: don't be afraid of my II élegie: it is in a style altogether different from the I.; it is less abstract ... Remark on second program: I propose the Sonata by [Ernest] Bloch if you have not already put it on the program of another concert. It is moreover the best work of Bloch that I know. If you think it is a good idea to repeat my first sonata, you can choose the third or fourth program. I believe that the Roumanian songs (Program 1) can be easily sung in the original language by a French man or woman because the Roumanian language, being also a neolatin language, is not difficult to pronounce." He goes on to say that "It would be of great importance to me if you could engage for the performance of my sonatas and perhaps also for that of Bloch Mademoiselle Jelly d'Arányi, because a better violinist than she cannot be found". He has "not yet finished my second Sonata for Violin and Piano but I hope to reach the end before Christmas." He is returning an article by Dr. Felber because "it does not give precise and concise views of the popular Slovak music" and then explains in great detail what he would recommend deleting if the recipient cannot avoid publishing it, explaining that "In the rest of the article there are similar misunderstandings according to my opinion. I have marked them in red on the margin of the page or underlined them in red."
Bartók and his fellow Hungarian Jelly d'Arányi gave recitals together in London a few months prior to this letter and again in May 1923, performing sonatas which Bartók had originally dedicated to d'Arányi's sister Adila, also a violinist.